2015, marks the centennial of the birth of Dr. Verner Suomi, the Finnish-American educator, inventor, and scientist known as the “Father of Satellite Meteorology.” 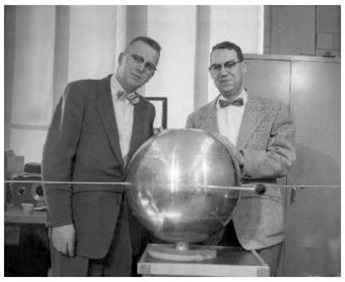 Professors Suomi and Parent pose with the Explorer VII satellite. The black ball is part of their heat budget experiment.

“When I first began my work with meteorological satellites no one in the Department of Meteorology seemed particularly interested, but they didn’t try to impede progress in the field for which I’m forever thankful.”

Such were the words of Dr. Verner Suomi, the Finnish-American educator, inventor, and scientist known as the “ Father of Satellite Meteorology, ” who was one of the first to recognize the role that satellites could play in weather forecasting.

This year, 2015, marks the centennial of Suomi’s birth, and although it might seem odd that we’re mentioning this now, at the close of December, we would be remiss to let the year pass without acknowledging Suomi and the impact he had on satellite weather studies.

It’s been said that the era of satellite meteorology began with the launch of Explorer 7 on October 13, 1959 (roughly two years after Sputnik). Aboard Explorer 7 was Suomi’s first instrument, the flat plate radiometer , which measured the Earth’s radiation budget. Data from this instrument not only led Suomi and his students to discover that the earth absorbed more of the sun's energy than originally thought, but also indicated that the planet’s energy budget varies markedly due to the effect of clouds and other absorbing constituents.

Six year later, in 1965, Suomi and professor of electrical engineering Robert Parent founded the Space Science and Engineering Center (SSEC) at the University of Wisconsin–Madison. According to NASA, SSEC was a “ hotbed of invention and research ,” and the birthplace of Suomi’s most important and lasting invention, the spin-scan camera , which launched in 1966 on the geostationary satellite ATS-1.

Thanks to this new instrument, scientists could now observe the same area of the Earth continuously rather than as a series of disjointed images, allowing them to see the formation of weather systems. As NASA put it in this article on Suomi’s legacy and contributions:

“Satellite sensing technology was suddenly transformed from the production of interesting snapshots into the gathering of meaningful, quantitative data. It is no exaggeration to say that this invention revolutionized satellite meteorology. The weather satellite images that the public around the world sees on the evening news and relies on to protect them from natural disasters are a direct result of Suomi’s invention.” By enabling scientists to measure and track air motion, cloud heights, rainfall, even pollution and natural disasters, the camera greatly improved forecast accuracy, saved many thousands of lives, and quickly became a necessity. Although Suomi’s original camera design is no longer in use, his basic concept was adopted for many of the satellites that followed.

In 1971, Suomi began working on his next accomplishment, the Visible-Infrared Spin-Scan Radiometric Atmospheric Sounder (VAS), which he believed would aid the prediction of severe weather. When the VAS was launched in 1980 aboard Geostationary Operational Environmental Satellite-4 (GOES-4), it performed as predicted, allowing scientists to observe severe storms over regions of hundreds of thousands of square miles.

Of course, as the number of instruments aboard weather satellites increased, so did the amount of data they provided. To handle it all, Suomi spearheaded the development of a computer system that could handle the influx. The result was the Man-computer Interactive Data Access System (McIDAS) introduced in 1973. McIDAS greatly facilitated the analysis of satellite imagery and data, and remains in use today by the National Storm Prediction Center, the National Weather Service, the National Transportation Safety Board, NASA’s Langley Research Center, and many other agencies and companies around the globe.

Suomi’s achievements earned him election to the National Academy of Engineering in 1966; a National Medal of Science, awarded by President Jimmy Carter in 1977; the Franklin Medal in 1984; the Charles Franklin Brooks Award from the American Meteorological Society in 1980; a lifetime achievement award from the International Meteorological Organization; and many other national and international awards.

Suomi died on July 30, 1995, but his legacy in the world of satellite meteorology continues with NOAA/NASA’s Suomi-NPP polar-orbiting satellite (launched in 2011), which was named in his honor.

For more about Verner Suomi, visit the Virtual Suomi Museum.