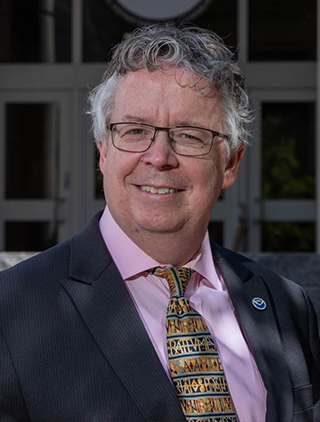 Stephen Volz serves as the Assistant Administrator for NOAA's Satellite and Information Service.

Dr. Volz has 35 years of professional experience in aerospace. As the NOAA lead for all space Earth Observations, Dr. Volz helps define the space and information architecture for NOAA, and, working in partnership with NASA and other US agencies, helps guide the U.S. approach to future civil space observations. He is a leader in the international Earth observation community, serving as the NOAA Principal both to the Committee on Earth Observation Satellites (CEOS) and to the Coordinating Group of Meteorological Satellites (CGMS). Dr. Volz is the Principal U.S. representative to the Executive Committee of the international Group on Earth Observations (GEO), and in this capacity he helps lead efforts coordinating with global participants on the use of global Earth Observations data, including satellite-based observations, to further the delivery of comprehensive environmental information to communities around the world. He serves as the Co-Chair of the NOAA Observing Systems Council and is also a member of the NOAA Executive Council. Dr Volz also served as Acting Assistant Secretary of Commerce for Environmental Observation and Prediction (ASEOP), for almost 33 months over two periods 2016-2022.

Dr. Volz previously served as the Associate Director for Flight Programs in the Earth Science Division of NASA’s Science Mission Directorate where he managed all of NASA’s Earth Science flight missions and associated activities. Prior to serving as the Flight Program Director, Dr. Volz was the Earth Science program executive for a series of Earth Science missions, including EO-3 GIFTS, CloudSat, CALIPSO, and ICESat, and he led the Senior Review for the Earth Science operating missions. Dr. Volz worked in industry at Ball Aerospace and Technologies Corporation from 1997–2002, where he was the Project Manager for the Spitzer Space Telescope (formerly the Space Infrared Telescope Facility) superfluid helium cryostat and other flight projects. From 1986–1997 Dr. Volz worked for NASA’s Goddard Space Flight Center as an instrument manager, an I&T Manager, a systems engineer, and a cryogenic systems engineer on missions and instruments including the Cosmic Background Explorer (COBE), among others.

"At NESDIS, we aspire to provide a truly integrated digital understanding of our earth environment; an understanding that can evolve quickly to meet changing user expectations by leveraging our own capabilities and our partnerships.”
—Dr. Stephen Volz / NESDIS Administrator