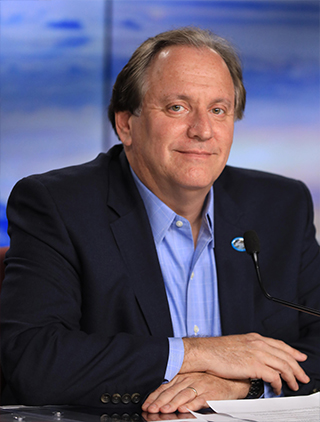 Mitch Goldberg, Senior Scientist at NESDIS, first began working at NOAA as an intern in 1979 within the NESDIS Office of Research and Application (ORA), now the NESDIS Center for Satellite Applications and Research (STAR).

In the mid 1980’s, Dr. Goldberg developed the first operational physical sounding algorithm, which is still utilized by the Polar Operational Environmental Satellite (POES) legacy satellites. He officially joined NOAA in 1990, and through the early 2000’s, served as the NOAA member of NASA’s AQUA AIRS science team, responsible for a number of sounding algorithms and overseeing the development of an operational system. Today this system is still providing AIRS data to NWP centers.

During this time, he also formed the Geostationary Operational Environmental Satellites R-Series(GOES-R) algorithm working group (AWG), responsible for providing the science algorithms for the GOES-R operational production system. In 2011, he moved to the Joint Polar Satellite System (JPSS) program to become the new JPSS Senior Scientist. Here, he served as an independent expert and representative of the science and user communities responsible for ensuring the scientific integrity at all stages of satellite development.

Dr. Goldberg is a Fellow of the American Meteorological Society (AMS), and the current chair of the AMS Satellite Meteorological, Oceanography, and Climatology Committee. He has received three Gold Medals, one Silver Medal, and five Bronze Medals from the Department of Commerce, including the 2010 NOAA Administrator’s Award for leadership in developing the international Global Space-based Inter-Calibration System (GSICS). He received the University of Maryland’s Most Distinguished Alumnus Award from the Department of Atmospheric and Oceanic Science in 2004.