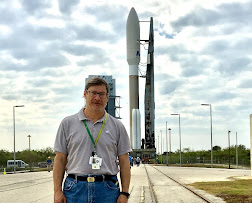 Alexander Krimchansky is the lead systems engineer for the GeoXO and GOES-R Series Programs. In this role, he is responsible for requirements management and analyses of the spacecraft and instruments through formulation, development, launch, and on-orbit checkout.

Alexander began his NASA career in 1983. Before leading GeoXO Program systems engineering, he was the GOES-R Program flight systems engineer, culminating in the successful launch and orbit-raising of the GOES-R, S, and T satellites. Previously, Alexander was a project manager and a systems engineer for the NASA Earth Observing System Data Operations System and the fault manager for the EOS Aqua spacecraft. He also spent six years on the Earth Science Data and Information System project in various systems engineering roles, finishing up as system manager. Earlier in his career, Alexander was an electronics engineer responsible for designing and integrating special-purpose computers for ground data processing.